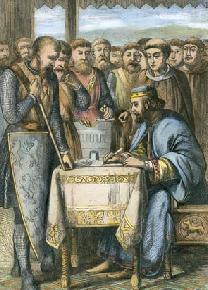 On June 15 1215 King John found himself coerced by a rather motley crowd of rebellious nobles into affirming their opportunist list of requirements for what they considered good government and to agree to change some of the laws and his style of governance to suit their demands. He was presented with a list of some 60 clauses in Latin closely bunched together as was the custom in the thirteenth century (see illustration below). He reluctantly agreed to them all as he had little to no choice because the disastrous political situation was largely but not entirely created through his own mismanagement of the country as he followed on from King Richard’s more experienced and diplomatic reign. Unbeknown to the barons he had no intention of fulfilling any promises as a result of being coerced and in due course the Magna Carta was annulled by John’s ally, Pope Innocent III. This led to civil war known commonly as the First Barons’ War.

One of the remaining 4 copies of the 1215 Magna Carta

The list of demands written on vellum and copied a few times for distribution around the country was later known as Magna Carta. It is not hyperbole to suggest that on that day in 1215 the English monarchy changed forever. Some 800 years later the influence of Magna Carta has been felt over the ages by billions of people who have lived as a result of its influence over law and governance, in a free society as a result of what was decided on that day in a marshy area on the banks of the River Thames or more likely on an island in the Thames, near Windsor Castle, called Runnymede.

Magna Carta’s very brief practical effect in 1215, its near immediate annulment by Pope Innocent III and eventual reissuing in modified form in 1216, 1217 and 1225 until final consolidation in 1297 suggests a long journey of growth. Today the 1297 version is accepted as final by the UK. Although most clauses have been subsumed into modified contemporary law or removed as being unnecessary in our times there are still three (some say four, but two clauses have been combined into one in the 1297 version) remaining on the statutes. These relate to the freedom of the English church, the City of London and the right to trial by jury.

An exemplification of the 1297 Charter remains on permanent display in Parliament House in Canberra. The government acquired the Charter in 1952 by purchase from a private school in England. It is only one of two original examples of any exemplification to be held outside the UK. The other is in the USA.

In 1965 Lord Denning then Master of the Rolls in the UK described Magna Carta as ‘the greatest constitutional document of all times - the foundation of the freedom of the individual against the arbitrary authority of the despot’. We can certainly be assured of the fact that another remarkable document, the Australian Constitution, was formulated with Magna Carta in mind and which today maintains our freedoms guaranteed by the Crown and over which the governing class has no power to change unless we the people agree.

Over the centuries Magna Carta’s demands crossed oceans to other parts of the (mainly British-influenced) world but they never crossed to the European mainland which based its legalities largely on the concept of Roman (civil) as opposed to Common law as used in England.

Simply summated one might say that Civil (Roman) Law is based on published legislation and is interpreted from what has already been codified thus in most jurisdictions where it predominates criminal suspects are commonly arrested and imprisoned first, often on the basis of suspicion or flimsy hearsay and before any hard evidence has been found and brought, and where the evidence is then sought later while the suspect is under lock and key. An investigative process can take months or sometimes even years. It adopts an inquisitorial method of cross examination of defendants without recourse to anything but what the law states at that moment. Napoleon in the empire he created through the conquest of much of Europe cemented this system in his Civil Code and from there it has influenced the vast majority of nations of the world and in particular those not influenced by Magna Carta. 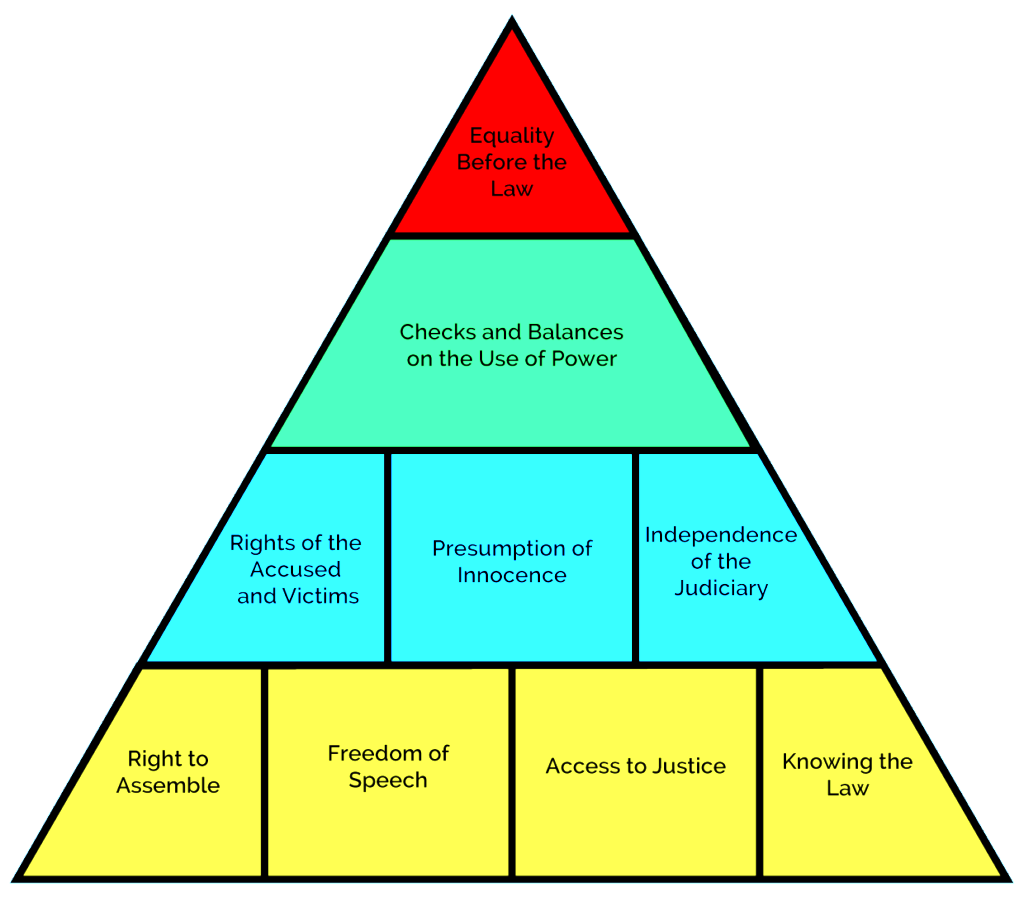 Common (English) Law on the other hand relies on preceding legal cases and judgements for guidance by counsels and judges and relates back to Magna Carta and Habeas Corpus. It is at base an English system. Habeas Corpus stipulates that an arrested person must appear in open court within hours, or at the most a few days (or in very extreme terrorist cases, 28 days), and there charged formally with a precise accusation. If so required, the prosecution must be able to produce their evidence of a prima facie case to answer, at that hearing. Nobody therefore can be subjected to any legal act, like arrest or detention, without previously collected evidence.

Some countries may have a basis of civil law but also use common law now and then. The same situation occurs in common law countries where a mixture of the two can be used. English Law for instance is different to Scottish law. The former is based on Common law but the latter uses both codified and common law although which is not to say that England does not also have has civil law cases and courts.

What was so revolutionary about Magna Carta in its original 1215 form later to be confirmed in the final version of 1297?

Magna Carta is written in Latin, the language most commonly used for official documents in civilised countries at that time. Clause 38 of Magna Carta (the clauses were only numbered in later centuries and were unknown in 1215) states a most important principle relating to the freedom of the individual and it is worth quoting the clause itself in the original language:

No bailiff is in future to put anyone to law by his accusation alone, without trustworthy witnesses having been brought in for this.

The two revolutionary demands lie with the verb ‘inductis’ and the pronoun ‘aliquem’. Inductis is a perfect passive participle meaning ‘having been brought in’ in other words any person accused cannot be brought to law until after witnesses have been collected together and the noun ‘aliquem’ translates as ‘anyone’. In other words every citizen from the lowliest upwards is protected to the same degree without preference. These demands were, for want of a better word, revolutionary at the time.

It is not too much to say that the use of these two words and the agreement to their use by King John in 1215 changed the nature of the English monarchy for ever and thus formed the basis of the law we have in Australia as well as the USA, New Zealand, Canada and the UK along with other former British-influenced nations in ensuring the rights of the individual. Magna Carta’s impact is of immense significance to the governance of these countries. In due course it develops into the concept of ‘innocent until proven guilty’ whereas countries not affected by Magna Carta assume guilt and innocence has to be proven.

Although the importance of the Great Charter cannot be disputed there was an earlier precursor to it in the Charter issued at King Henry I’s coronation in 1100. The facts around Henry’s accession make interesting reading but suffice to say that his speed in taking control at the death of King William Rufus along with the support of his barons makes sense of the Charter’s opening words:

Know that by the mercy of God and by the common counsel of the barons of England I have been crowned king of this realm. And because the kingdom has been oppressed by unjust exactions, being moved by reverence towards God and by the love I bear you all, I make free the Church of God … I abolish all the evil customs by which the kingdom of England has been unjustly oppressed.

Undoubtedly the barons holding King John to near ransom at Runnymede were aware of the Charter and used it as a basis for demanding greater say in the running of the kingdom.

In October 1216 King John died and was succeeded by his son Henry who reigned as King Henry III. Henry became king at 9 years of age and therefore the country was ruled by a Council but remarkably Henry, presumably through his Council, adopted Magna Carta and confirmed it in 1216 and, after some politicising with groups of still disaffected nobles, again in 1217. Concomitant with the Great Charter’s progress As well as confirming Magna Carta, King Henry also endorsed a Charter of the Forest which addressed the rights of the common man (as opposed to nobles), in respect to free access to forest lands. These ‘rights’ went back to Anglo-Saxon times but had been usurped and otherwise modified by William the Conqueror and William Rufus. Many commentators see the Forest Charter as complementary to Magna Carta and when both are put together a greater coverage of freedoms are enshrined in law.

Unlike his father King John, Henry put his seal to the charter willingly in 1225 (unchanged since 1217) and confirmed it three times. By the end of his reign, Magna Carta was enshrined as the bedrock of English values. There is no question that the character of Henry ensured that the fundamentals of Magna Carta were continued and he ensured this by establishing the first fully working parliament. The fact that he reigned for 56 years gave England stability and peace and this fostered conditions for Magna Carta to become part of the fabric of English governance and from which Australia today should look back with gratitude.

The Magna Carta memorial at Runnymede UK near the site where it was confirmed (sealed) by King John in June 1215.