The Australian Constitution - The Beginnings

HOW DID THE AUSTRALIAN CONSTITUTION COME INTO BEING?

Following the arrival of the British fleet in 1788, the settlement in Sydney quickly grew in numbers with adventurous people moving and establishing themselves in new areas around the eastern coast of Australia. The development was so fast that within 35 years, from 1823 onwards, the central government in London created new colonies and then separate parliaments to govern them.

However, even though Australia was developing into a vibrant and prosperous country, it was still not a nation but a group of six separate colonies with different rules. There was no free trade between the colonies even though they were all within the same landmass and mainly populated by people from England. Each colony owed separate allegiance to Britain.

Towards the end of the 19th century there were rising concerns over the defence of Australia. Each colony had its own internal security arrangements which were hardly adequate and there was no attempt at a united colonial defence force. Fears of invasion by Germany and Russia and the lack of an 'Australian' army or navy to in any way to counter these matters revealed a problem. Furthermore, the closest British defence force was in India which would have taken several months to mobilise and reach Australian shores. 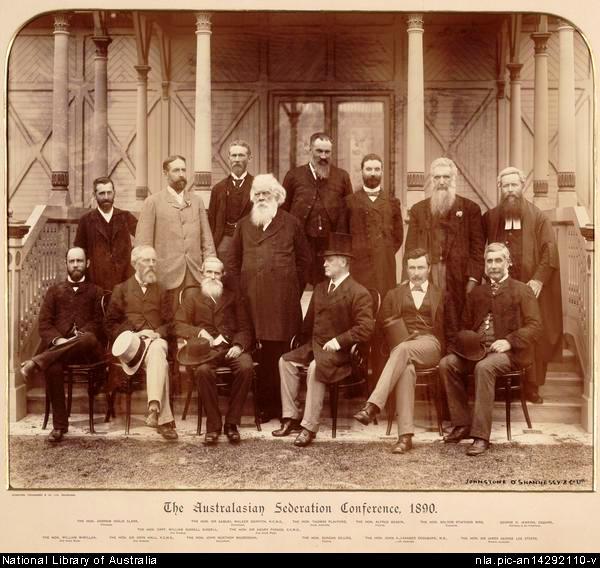 Accordingly, in 1889 the British Government commissioned Major-General James Edwards, until that time commander of British troops in China, to report on the defence of the Australian colonies. Unsurprisingly, the Edward’s report called for the federation of the forces of all Australian colonies.

When giving thought to a new constitution the committee tasked with the drafting looked carefully at the constitutions of other nations including Canada, the USA, Switzerland and the non-codified constitution of the United Kingdom. Accordingly, the eventual make-up of the Australian Federation has a similar arrangement to that of Canada with marked differences. The creation of an Australian Senate follows that of the US Senate and the requirement for a referendum to amend the constitution was modelled on the Swiss style of plebiscites.

It should be noted that, whilst the authority and the impetus to federate into a sovereign nation was derived from the British parliament, the Australian Constitution itself was drafted by Australian delegates and voted upon in a series of referendums by all Australians who were eligible to vote at the time. This was in the spirit of freedom inherited by Australia from Britain and in this manner, Australia became entirely independent of governance from the British government and the British parliament. This independent status was acknowledged in the Statute of Westminster of 1931, enacted by the Australian Parliament in 1942.

Queen Victoria gave Royal Assent to the Commonwealth of Australia Constitution Act which was an Act of the British parliament on the 9th of July 1900. The Australian Constitution was itself a clause of the Act and commenced with a preamble considered to be unique in its opening words: “Whereas the people of New South Wales, Victoria, South Australia, Queensland, and Tasmania (Western Australia joined after the Act was passed), humbly relying on the blessing of Almighty God, have agreed to unite in one indissoluble Federal Commonwealth under the Crown of the United Kingdom of Great Britain and Ireland, and under the Constitution hereby established.”

Also known as Australia’s ‘Document of Federation’, the Australian Constitution was and is a modern document and remains as relevant to today’s needs as it was in 1901. In the century following federation, there have been forty-four proposals to amend the constitution but only eight have passed which is an indication of how jealously Australians guard their constitutional rights.

Sir Edmund Barton, Australia’s first prime minister, had earlier coined the phrase “For the first time in history, we have a nation for a Continent, and a Continent for a Nation.” It was thus that Australia as a nation came into being.