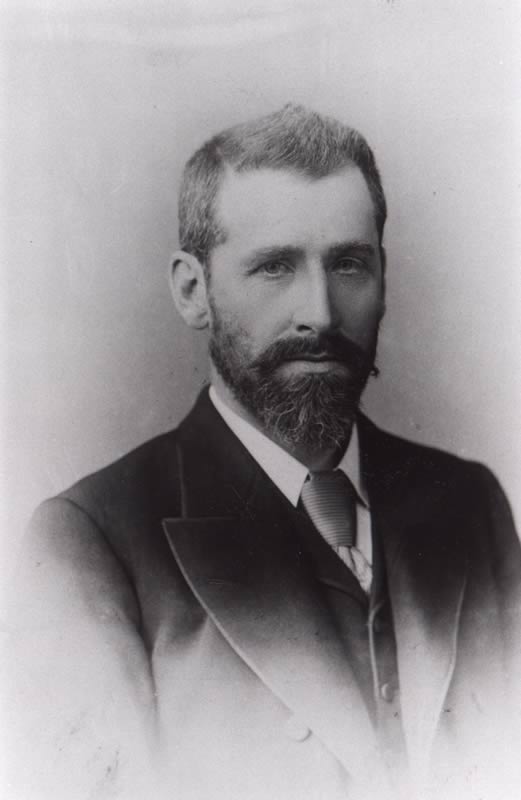 Andrew Inglis Clark (he preferred to be known by his middle name of Inglis, which was his mother’s maiden name, as it differentiated him from the many Andrew Clarks around) was an unusual addition to the group of men who worked towards Federation. Being a republican would have set him aside and if it was not for his legal brilliance, he would have been repudiated, even vilified. Clark also believed that Australia should adopt the basics of the United States Constitution for its own constitution.

However, he became the main delegate from Tasmania to the various Federation councils and conventions and greatly influenced the Australian Constitution that we know today.

He was born in Hobart in 1848. His father was an engineer and building contractor and he was home taught until sent to high school. He became a qualified engineer but aged 24 he decided to study law and was called to the bar and became a barrister in 1877, aged 29.

As a young man he moved towards the radical left and, together with other republicans, joined the American Club. He stood for the Tasmanian parliament in 1878 and, even though he was widely attacked for being a revolutionary, he was elected due to personal patronage but lasted for only one term.

However, 10 years later he was back in the parliament and became Attorney General. During his early years in the parliament he initiated 150 ministerial bills and, to a large extent, completely reformed the law in Tasmania.

In 1883 Clark went to the United States of America and when over there studied the American Constitution and returned to Hobart convinced that Australia should adopt it as a whole.

He was a fervent supporter of the Federation movement and was a delegate from Tasmania to the Federal Councils of 1888, 1889, 1891 and 1894 and the Australasian Federation Conference in Melbourne in 1890. Prior to the 1891 National Convention in Sydney he circulated his own draft constitution bill largely drawn from the United States Constitution and the British North American Act which established the country we know today as Canada. As a result, Clark was elected to the Constitutional Committee and became chairman of the Judiciary Committee. In his own words, Clark had said:

"In all other matters I have followed very closely the Constitution of the United States, with such alterations and additions as the local circumstances of the Colonies and the political history of the United States seemed to indicate to me as being desirable."

He opted out from being a delegate to future conventions possibly because a number of sections in his proposed constitution were subjected to criticism and arguments by other delegates whom he could not bully into accepting his viewpoint. One was a former premier and others current or former Attorneys-General and one a future premier.

However, eighty-six sections from his original draft are similar to those that became the final draft, but this is not to say that he wrote the major part of the constitution because many of the sections copied from the American and Canadian constitutions were already being studied by the other drafters. However, his written draft together with his implied ideal that the resultant constitution was to be a ‘living force’ paved the way for the eventual document which became the Australian Constitution on the 1st of January 1901.

In 1898 Clark was appointed a judge of the Supreme Court of Tasmania and senior judge in 1901.

A persevering student, his sympathies were republican, centring upon Algernon Sydney among Englishmen, upon Mazzini in Italy, and especially upon the United States, a country to which in spirit he belonged, whose Constitution he reverenced, and whose great men he idolized.

Note: Algernon Sydney was a 17th century republican political theorist, colonel, and commissioner of the trial of King Charles I of England.

Giuseppe Mazzini was a 19th century Italian politician, journalist and leader of the Italian revolutionary movement.