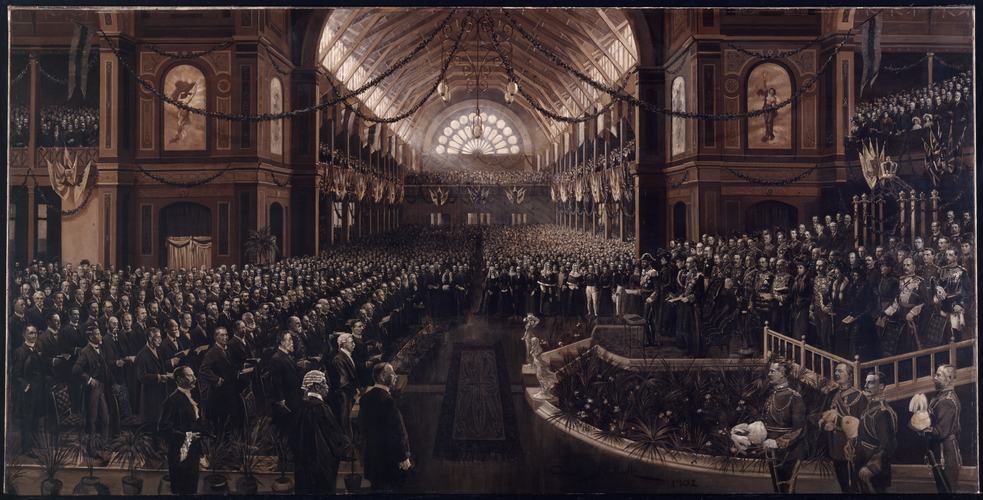 The Opening of the First Commonwealth Parliament by the Duke of Cornwall and York (later King George V) in Melbourne on 9 May, 1901. Painting by Charles Nuttall.
A 1901 photogravure reproduction is on loan to the Australian Nationhood Library.

The Australian Nationhood Foundation (ANF) has been set up to provide information on the Australian Constitution and our system of governance. The sorts of things that we will be providing information on used to form a part of the school’s curriculum but for decades have no longer done so.

For instance, how did our Constitution come into being? How is it that the six states continue to have a measure of independence with their own governments? And so on.

We are also providing information on the basis of our system of governance which is based on what we call ‘The Westminster system’ and how laws came about.

Because we are not associated with the government or funded by a big corporation, most of our information will be circulated via this website and accompanying social media, which is yet to be established.

On this website, which is in the process of being developed, you will find some articles, videos and frequently asked questions. Over the next few months we will be adding new sections including comic-like strips to make what can be unclear easier to understand.

As our funding becomes more established we will also be producing literature for distribution amongst schools, to new Australians and to anyone who may be interested. We are also in the process of preparing courses on the Australian Constitution and on our system of governance. These courses will be online but interspersed with visits to State and Federal parliaments which will include lectures and tours.

We will advertise on this website and elsewhere when we are ready to proceed with these courses which will be divided into various age groups. Anyone within those age groups is willing to apply.

Please have a look at this website, bearing in mind it is still being developed, and let others know about it.