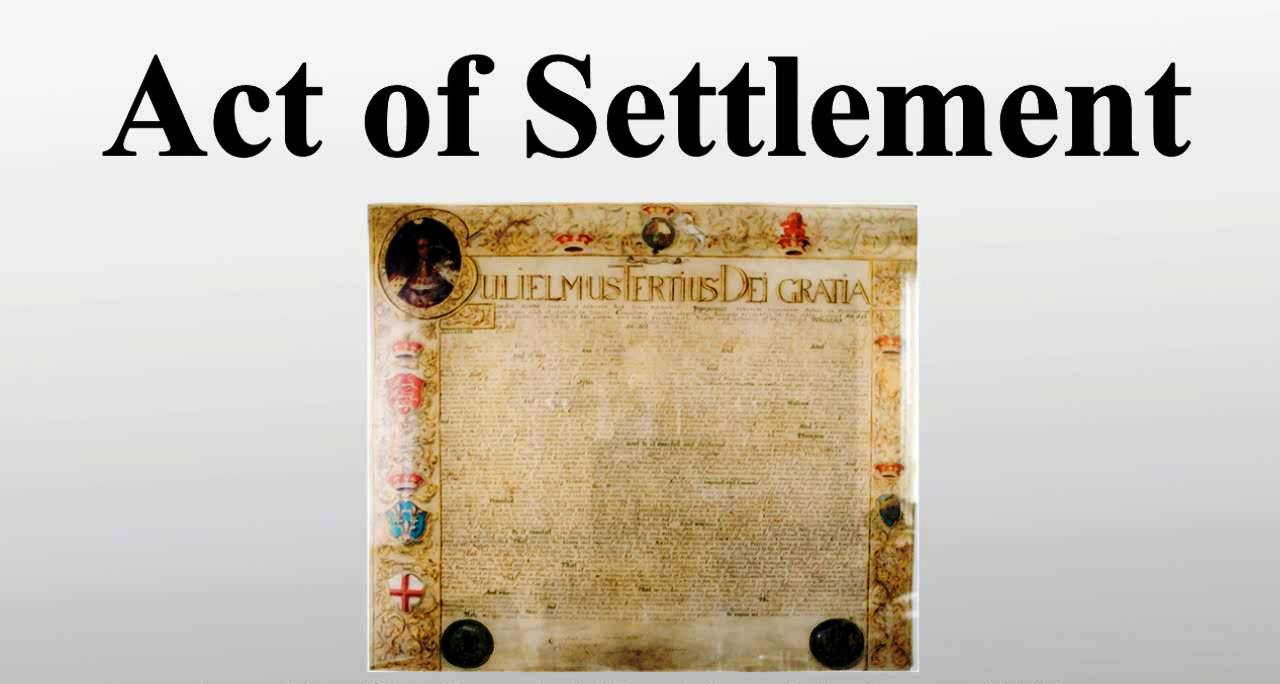 The correct title of this Act is Act of Settlement 1700 12 and 13 Will 3 c 2 which states that the Act was formulated in the parliamentary session which began in 1700 but was not assented to by William III until 1701. In many reference sources the date is given as 1701 but until the system was changed in 1793 all Acts and Laws were dated by the session in which they were formulated. '12 and 13 Will 3' means in the twelfth and thirteenth years of the reign of William III and 'c 2' stands for Chapter 2 which means that this was the second Act formulated in the twelfth year of William's reign.

The wording used below has updated spelling. The original wording, along with the proposed changes to Succession, can be read on: http://www.legislation.gov.uk/aep/Will3/12-13/2

Whereas in the first year of the reign of Your Majesty, and of our late most gracious sovereign lady Queen Mary (of blessed memory), an Act of Parliament was made, entitled, "An Act for declaring the rights and liberties of the subject, and for settling the succession of the crown," wherein it was (amongst other things) enacted, established, and declared that the crown and regal government of the Kingdoms of England, France, and Ireland, and the dominions thereunto belonging, should be and continue to Your Majesty and the said late Queen, during the joint lives of Your Majesty and the said Queen, and to the survivor: and that after the decease of Your Majesty and of the said Queen, the said Crown and regal government should be and remain to the heirs of the body of the said late Queen; and for default of such issue, to Her Royal Highness the Princess Anne of Denmark, and the heirs of her body; and for default of such issue to the heirs of the body of Your Majesty.

And it was thereby further enacted, that all and every person and persons that then were, or afterwards should be reconciled to, or shall hold communion with the see or Church of Rome, or should profess the popish religion, or marry a papist, should be excluded, and are by that Act made for ever incapable to inherit, possess, or enjoy the Crown and government of this realm, and Ireland, and the dominions thereunto belonging, or any part of the same, or to have, use, or exercise any regal power, authority, or jurisdiction within the same: and in all and every such case and cases the people of these realms shall be and are thereby absolved of their allegiance: and that the said Crown and government shall from time to time descend to and be enjoyed by such person or persons, being Protestants, as should have inherited and enjoyed the same, in case the said person or persons, so reconciled, holding communion, professing or marrying, as aforesaid, were naturally dead.

After the making of which statute, and the settlement therein contained, your majesty's good subjects, who were restored to the full and free possession and enjoyment of their religion, rights, and liberties, by the providence of God giving success to your majesty's just undertakings and unwearied endeavours for that purpose, had no greater temporal felicity to hope or wish for, that to see a royal progeny descending from Your Majesty, to whom (under God) they owe their tranquillity, and whose ancestors have for many years been principal assertors of the reformed religion and the liberties of Europe, and from our said most gracious sovereign lady, whose memory will always be precious to the subjects of these realms: and it having since pleased Almighty God to take away our said sovereign Lady, and also the most hopeful Prince William, Duke of Gloucester (the only surviving issue of Her Royal Highness the Princess Anne of Denmark) to the unspeakable grief and sorrow of Your Majesty and your said good subjects, who under such losses being sensibly put in mind, that it standeth wholly in the pleasure of Almighty God to prolong the lives of Your Majesty and of Her Royal Highness, and to grant to Your Majesty, or to Her Royal Highness, such issue as may be inheritable to the Crown and regal government aforesaid, by the respective limitations in the said recited act contained, do constantly implore the divine mercy for those blessings: and Your Majesty's said subjects having daily experience of your royal care and concern for the present and future welfare of these Kingdoms, and particularly recommending from your throne a further provision to be made for the succession of the Crown in the Protestant line, for the happiness of the nation, and the security of our religion; and it being absolutely necessary for the safety, peace, and quiet of this realm, to obviate all doubts and contentions in the same, by reason of any pretended title to the Crown, and to maintain a certainty in the succession thereof, to which your subjects may safely have recourse for their protection, in case the limitations in the said recited act should determine.

II. Provided always, and be it hereby enacted, that all and every person and persons, who shall or may take or inherit the said Crown, by virtue of the limitation of this present act, and is, are or shall be reconciled to, or shall hold communion with, the See or Church of Rome, or shall profess the popish religion, or shall marry a papist, shall be subject to such incapacities, as in such case or cases are by the said recited act provided, enacted, and established; and that every King and Queen of this Realm, who shall come to and succeed in the imperial Crown of this Kingdom, by virtue of this act, shall have the coronation oath administered to him, her or them, at their respective coronations, according to the act of Parliament made in the first year of the reign of His Majesty, and the said late Queen Mary, intituled, An act for establishing the coronation oath, and shall make, subscribe, and repeat the declaration in the act first above recited mentioned or referred to, in the manner and form thereby prescribed.

III. And whereas it is requisite and necessary that some further provision be made for securing our religion, laws and liberties, from and after the death of His Majesty and the Princess Anne of Denmark, and in default of issue of the body of the said Princess, and of His Majesty respectively; be it enacted by the King's most excellent majesty, by and with the advice and consent of the Lords Spiritual and Temporal, and Commons, in Parliament assembled, and by the authority of the same, That whosoever shall hereafter come to the possession of this Crown, shall join in communion with the Church of England, as by law established;
That in case the Crown and imperial dignity of this Realm shall hereafter come to any person, not being a native of this Kingdom of England, this nation be not obliged to engage in any war for the defence of any dominions or territories which do not belong to the Crown of England, without the consent of Parliament;
That no person who shall hereafter come to the possession of this Crown, shall go out of the dominions of England, Scotland, or Ireland, without the consent of Parliament;
That from and after the time that the further limitation by this act shall take effect, all matters and things relating to the well governing of this Kingdom, which are properly cognizable in the Privy Council by the laws and customs of this Realm, shall be translated there, and all resolutions taken thereupon shall be signed by such of the Privy Council as shall advise and consent to the same;
That after the said limitation shall take effect as aforesaid, no person born out of the Kingdoms of England, Scotland, or Ireland, or the dominions thereunto belonging (although he be naturalized or made a denizen, except such as are born of English parents) shall be capable to be of the Privy Council, or a member of either House of Parliament, or to enjoy any office or place of trust, either civil or military, or to have any grant of lands, tenements or hereditaments from the Crown, to himself or to any other or others in trust for him;
That no person who has an office or place of profit under the King, or receives a pension from the Crown, shall be capable of serving as a member of the House of Commons;
That after the said limitation shall take effect as aforesaid, judges commissions be made quamdiu se bene gesserint, and their salaries ascertained and established; but upon the address of both Houses of Parliament it may be lawful to remove them;
That no pardon under the Great Seal of England be pleadable to an impeachment by the Commons in Parliament.

IV. And whereas the laws of England are the birth-right of the people thereof, and all the Kings and Queens, who shall ascend the throne of this Realm, ought to administer the government of the same according to the said laws, and all their officers and ministers ought to serve them respectively according to the same: the said Lords Spiritual and Temporal, and Commons, do therefore further humbly pray, That all the laws and statutes of this Realm for securing the established religion, and the rights and liberties of the people thereof, and all other laws and statutes of the same now in force, may be ratified and confirmed, and the same are by His Majesty, by and with the advice of the said Lords Spiritual and Temporal, and Commons, and by authority of the same, ratified and confirmed accordingly.