After years of conferences and then referendums, the six independently governed colonies which then made up the continent of Australia were federated into one nation under the Commonwealth of Australia Constitution Act 1900, an act of the Parliament of the United Kingdom. The British Parliament was at that time the only body able to pass the legislation required and it acted freely and willingly in doing so. Its purpose had always been to promote a new federated Australian nation.

The act was given royal assent on the 9th July 1900 and came into force at the inauguration ceremony of the Commonwealth of Australia on the 1st of January 1901 which took place at Centennial Park, Sydney watched over by a crowd estimated to be around a quarter of a million people.

The ceremony commenced with the ‘Declaration of the Commonwealth of Australia’ and was followed by the swearing in of the first Governor-General, the Earl of Hopetoun, followed by the swearing-in of the first Prime Minister Sir Edmund Barton and his ministry. In December 1900, Lord Hopetoun had appointed a temporary ministry under the Prime Ministership of Sir Edmund until elections could be held. 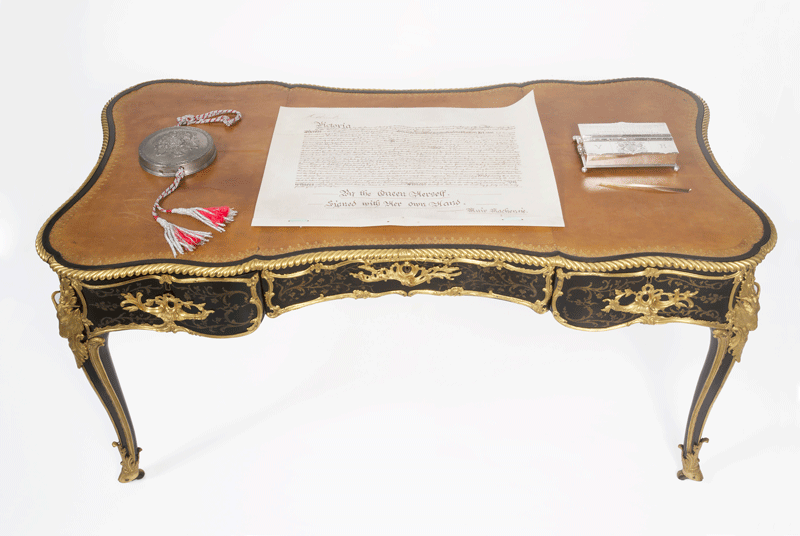 The signing of the documents utilised the very same pen, inkstand and table that had been used by Queen Victoria when she signed the Australian Commonwealth (Constitution) Act at Windsor Castle on the 9th of July 1900. Queen Victoria then gifted the table and other items to the new Commonwealth of Australia. They now form part of the Parliament House Art Collection and are still used on very special occasions.

Following the inauguration of the Commonwealth the first federal elections were held in March 1901. There were 75 seats in the Australian House of Representatives and 36 seats in the Australian Senate. The acting prime minister, Sir Edmund Barton was elected to the first Parliament as were six future Prime Ministers - Alfred Deakin, Chris Watson, George Reid, Joseph Cook, Andrew Fisher, and Billy Hughes. Barton formed his first full ministry immediately thereafter. 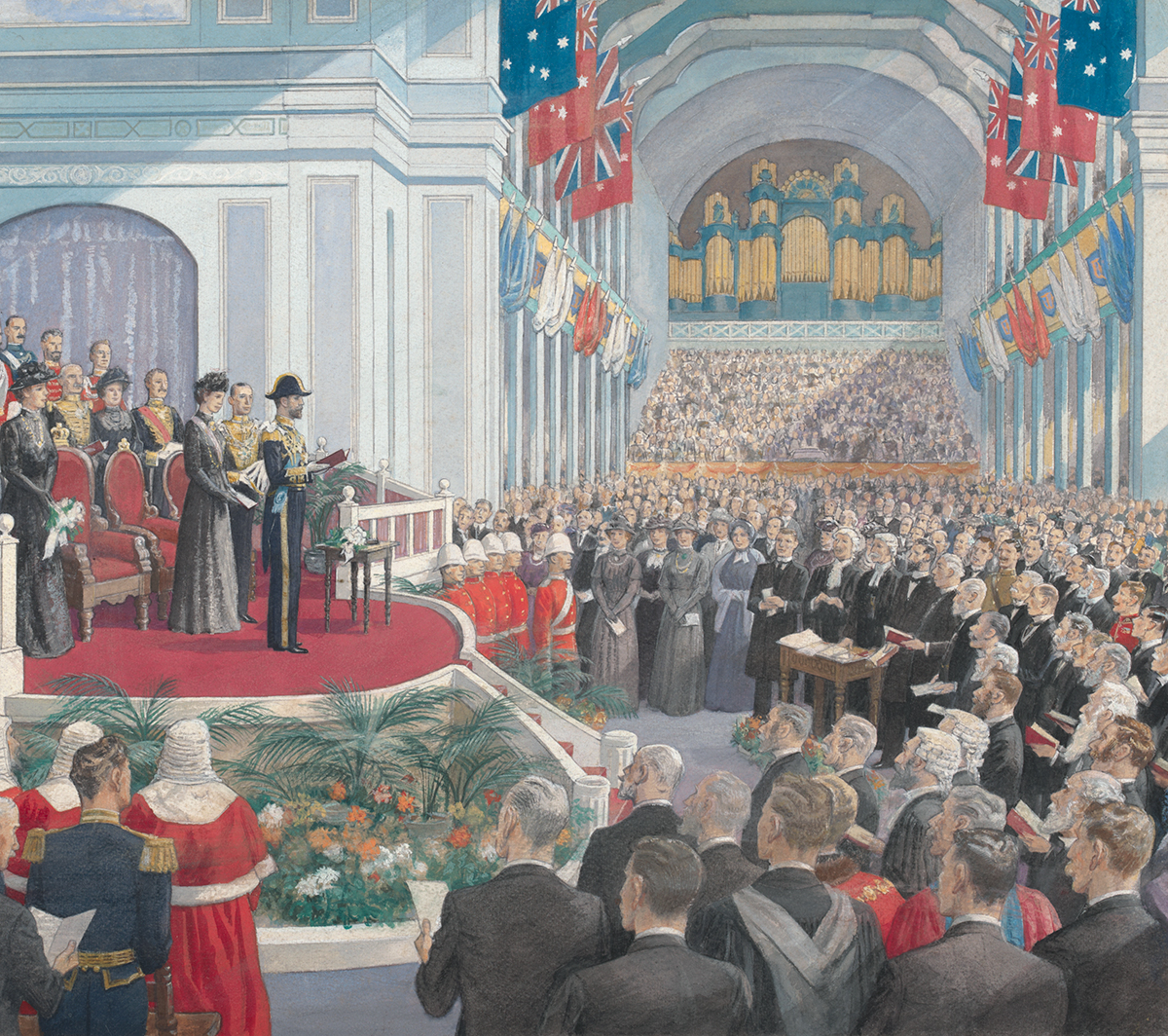 However, the First Parliament of the Commonwealth of Australia was opened at the Melbourne Exhibition Building on the 9th of May 1901 by the Duke of Cornwall and York (later King George V). The ceremony was held at the Exhibition Building as it was the only venue that was large enough to accommodate the 14,000 guests.

Thereafter the Victorian Parliament, having loaned its own premises to the Commonwealth, then met in the Exhibition Building. 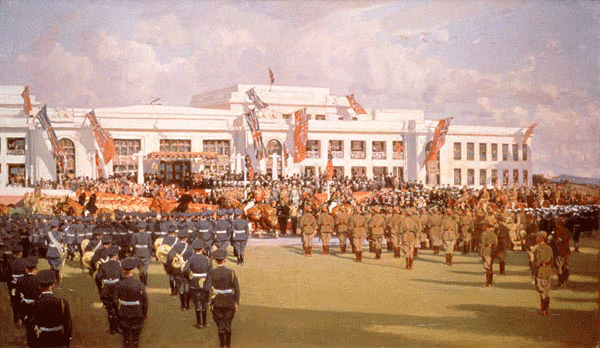 The reason for these provisions, which may have seemed to be peculiar, was that most delegates to the constitutional conventions did not want the new parliament to be based in Sydney and delegates from New South Wales did not want it to be permanently based in any other capital city, hence the provisions in clause 125. Following an extensive search, the site of Canberra was finally selected in 1908 for the location of the nation's capital city. At the time the area was mainly farmland and seemed an ideal spot for the new capital city of Australia.

Following delays due to the First World War, work on the site commenced in 1923 and was completed in early 1927 and the new (now old) Parliament House was opened on the 9th of May 1927 by the Duke of York (later King George VI).

By 1984 the number of members of the House of Representatives had increased to 148 and the number of senators to 72 whereas the parliament building had been constructed to house much smaller numbers. It had always been expected that the building would be replaced within 50 years and in 1978 plans started to be made for a new building.

The new Parliament House was opened by Queen Elizabeth II on the 9th of May 1988.

The Royal Exhibition Building is now used as a commercial exhibition venue.