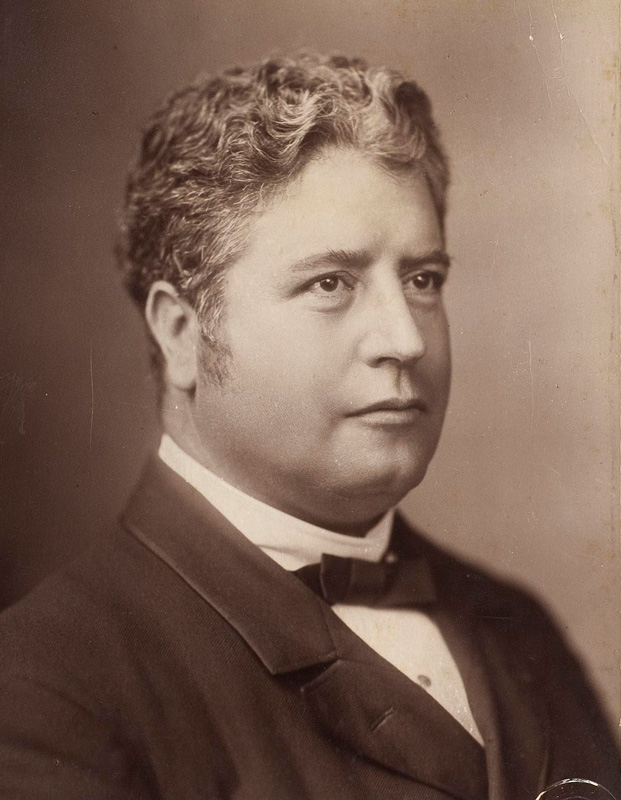 Edmund Barton was born in 1849 in Sydney. His father was an accountant and his mother ran an academy for girls. As a consequence, he had been home-taught and was well educated by the time he commenced his formal schooling. He did well at Sydney University winning a number of prizes and scholarships and in 1871, aged 22, he was admitted to the New South Wales bar as a barrister.

He had a great interest in politics and stood for Parliament on several occasions, finally winning a seat in the NSW Legislative Assembly in 1879. In 1883, just short of his 34th birthday, he became Speaker of the parliament, the youngest person at the time to have occupied that position.

In the ensuing years he served as Attorney General but was mainly involved with his law practice and in promoting union between the Australian colonies.

Although he had had an on-off political relationship with Sir Henry Parkes, he strongly supported moves by Parkes to bring about the federation of the colonies.

Edmund Barton was a delegate to the Constitutional Convention held in March 1891 alongside Sir Henry Parkes, who was the main motivator to hold the convention. Then aged 76, Parkes was stepping back from his public life and he handed the baton of continuing the work towards Federation to Barton. Whilst some delegates from other colonies mistrusted the motives of the delegates from New South Wales, which was the largest and originating colony, Barton’s grasp of constitutional matters was quickly appreciated and he became a part of the inner circle of the then leaders working towards Federation.

However, whilst work continued behind the scenes it was not until 1897 that a second Convention met in Adelaide.

Andrew Inglis Clark, who had earlier submitted the first draft of a new constitution did not attend this convention due to illness. Barton was asked to take his place as a member of the drafting committee which then comprised Sir Samuel Griffith, Charles Kingston and Edmund Barton.

Barton was still in the NSW Parliament, again becoming Attorney General and sometimes acting Premier but he was unable to persuade the parliament to agree to the Federal Constitution bill.

He therefore resigned from the Parliament and concentrated both on his law practice, because he needed to support his family, and on traveling around regional New South Wales to canvass the support of the people for the Constitution bill.v

Over the next few years, he addressed around 300 meetings rallying support for the union of the Australian colonies. By 1897 he was considered to be the acknowledged leader of the federal movement in all Australia and at the next Federal Convention was elected chairman of the drafting and constitutional committees.

Back in New South Wales, Barton still faced stiff opposition to the Constitution bill, which was being continually amended and which failed when the colony held a referendum to decide the matter. The other five colonies also held referendums amongst their own people. In 1898 Barton became the leader of the Opposition in the New South Wales Parliament. A second referendum was held and both Barton and the then Premier, Sir George Reid (later 4th prime minister of Australia), campaigned together and in June 1899 the people of New South Wales passed the Constitution bill.v

In 1900, Barton, as leader of the Australian delegation, was invited by the British Secretary of State for the Colonies, Joseph Chamberlain, to explain the draft constitution to the British government.

Because the six Australian colonies formed a part of the British Empire, the British parliament was the legislating body for major decisions and it was that parliament that was required to pass the Constitution bill for it to become law. After an amendment relating to appeals to the Privy Council in Britain had been agreed upon, the bill then passed through the British parliament and was given Royal Assent by Queen Victoria on the 9th of July 1900.

In December 1900, the first Governor-General of Australia, the Earl of Hopetoun, appointed a temporary ministry to take office until elections could be held. Edmund Barton was sworn in as Prime Minister. 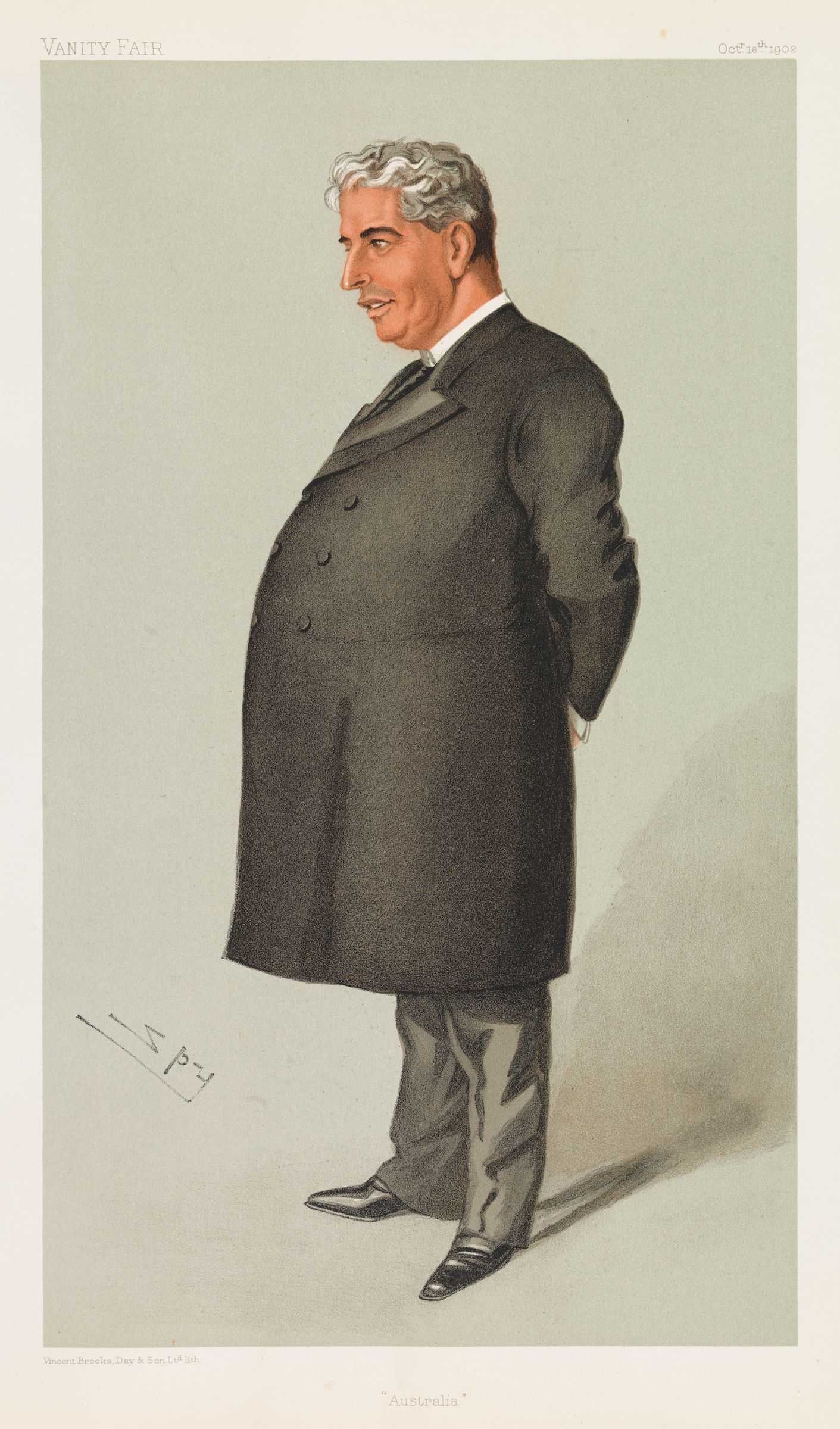 Elections for the new Federal Parliament were held in March 1901 and Barton was returned. The next few years were spent in setting up the new government, enacting legislation and uniting the disparate colonies into one nation.

On the 9th of May 1901 King Edward VII sent his son, the Duke of York (later King George V), to open the first Commonwealth Parliament on his behalf. The ceremony was held in the Exhibition Building in Melbourne, which became the interim capital whilst a new capital was being sought. As we all know today Canberra was chosen to be the site of the new capital being almost equal in distance between Sydney and Melbourne - an arrangement necessary at the time to appease the states of New South Wales and Victoria. On federation, the former Australian colonies became states within the Commonwealth of Australia.

It was at the Exhibition Building in Melbourne on the 3rd of September 1901, that the Australian Flag was first flown. It had been selected from entries at a competition for the design of a national flag, for which 32,823 entries had been submitted, a flag including elements from the five winning entries was chosen. You can read more about the Australian Flag on this website at https://www.nationhood.org.au/the_flag.

Although a federal system had been established by the new constitution, the states continued with their own parliaments and their own governments dealing with matters relating to their individual states. The Federal, or Commonwealth, Parliament had the power to make laws for defence, foreign affairs and all matters relating to the country as a whole. A number of these matters were laid down in the Constitution a copy of which is on this website at https://www.nationhood.org.au/the_australian_constitution.

The High Court, which, under the new constitution was to be Australia's most senior court of law, was established under the Barton ministry in 1903. Barton (by then Sir Edmund Barton GCMG) resigned his post as Prime Minister in the same year and was appointed as a judge of the High Court of Australia, a position he held until 1920 when he died suddenly of a heart attack. He had served as Australia’s first Prime Minister for 2 years and 10 months and a judge of the High Court for over 16 years.

A very literate but often complicated man, he had dedicated more than a solid twelve years of his life fighting for the union of the Australian colonies. His knowledge of constitutional law and his gift of oratory helped overcome and resolve a multitude of problems and obstacles that the Australian conferences on Federation had to deal with.

Both he and Sir Henry Parkes should be better recognised for the way in which they assiduously toiled to create the country we know today as Australia. This website pays tribute to them both and to all those who contributed in the drafting of the Australian Constitution which has served this country so very well for over 100 years.