The Origins of Modern Australia

Modern Australia is the term given to the constitutional, cultural and economic development of Australia since the arrival of the British in 1788.

For at least 50,000 years, and most likely longer, people had lived in relative isolation on the continent we today call Australia. Occasionally ships arrived from foreign lands, more particularly on the western and northern coasts but also the island of what we today call Tasmania. Their stay was short and had limited impact. 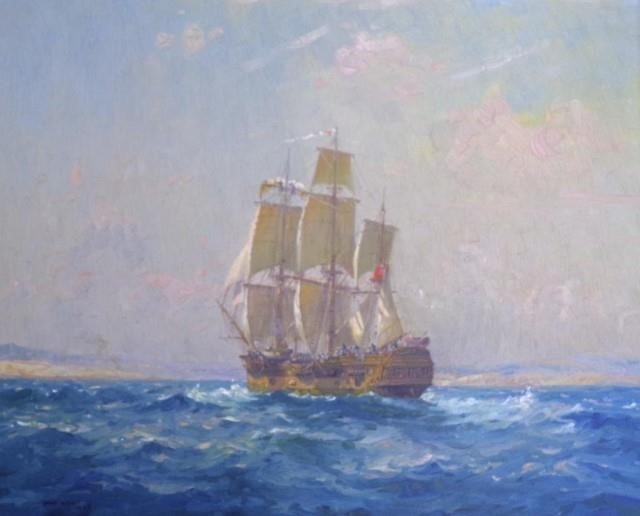 However, on the morning of 19 April 1770 a sole ship arrived off the coast of what is now Victoria with its first sighting of land made by Lieutenant Zachary Hicks. That ship was exploring this part of the world looking for a land, spoken of as the ‘fabled southern continent’, which was known to be there but at the same time was uncharted. The captain of that ship was James Cook and the ship was the Endeavour. Its arrival would herald the beginning of a new era for this country. Pictured alongside is an artist's impression of the Endeavour entering Botany Bay, Australia.

The peoples that Captain Cook encountered in his voyage as he charted the east coast of Australia, now known as Aboriginal Australians, are thought to have migrated from Africa and then through Asia around 70,000 years ago. However, because this migration occurred so many thousand years ago, there is no proof of the real origins of the Australian Aboriginal. What we do know is that genetic testing conducted in 2017 found that all of those tested were related to a common ancestor.

What we also know is that in 1770 the Australian Aboriginals were the oldest surviving people who still remained intact in the world.

In 1788 the British arrived again, but this time to settle and to establish an open penal colony. They found, as Captain Cook had, a nomadic people who were hunters and gatherers with limited farming skills. What we now know is that the Aboriginal population at the time was thought to be around one million. However, because they had lived in isolation for so long, they were susceptible to the diseases the British brought with them including smallpox, measles and influenza. Additionally, the disease-ridden vermin hidden away on the ships escaped onto the land. Whilst the British were fairly immune, the Aboriginals were not and epidemics raged through the populations causing a great number to succumb.

Whilst this was a great tragedy, it was unintentional just as a person catching the Covid virus moving amongst the community and spreading it to others is tragic but unintentional.

However, what was not unintentional was the parcelling out of lands to settlers, soldiers and later convicts for development. Although the British in those days looked on the Aborigines as nomadic, that is there were no settlements or villages, they did not understand that each tribe had lands that they hunted and gathered on as they moved around. When the British established farmlands and fenced them off, the aborigines naturally tore down the fences so that they could continue with their lifestyle of thousands of years old. However, the settlers didn’t see it that way and shot anyone who encroached upon what they considered to be their land.

As a result of the disease and misunderstandings, a great number of Aborigines died.

King George III, in whose name the eastern coast of Australia was claimed, had given instructions to his Governor, Arthur Philip, requiring him “to endeavour by every possible means to open an Intercourse with the Natives and to conciliate their affections, enjoining all Our Subjects to live in amity and kindness with them. And if any of Our Subjects shall wantonly destroy them or give them any unnecessary Interruption in the exercise of their several occupations. It is our Will and Pleasure that you do cause such offenders to be brought to punishment according to the degree of the Offence.”

Whilst the British rule in Australia sought to abide by these instructions, many of the settlers did not. However, whenever possible the Governor tried to bring any British miscreant to justice.

At Myall Creek in 1838, some 30 natives were killed by 11 settlers who were arrested and found guilty of murder and hanged. Of course, there were a number of occasions when settlers were attacked and they defended themselves.

However, these events took place many, many generations ago and whilst deeply regrettable, it is easy to be critical of those who strived to survive in a harsh and cruel environment whilst we exist in a comfortable and truly democratic lifestyle made possible by those very same people we, today, so cruelly judge.

Why did the British decide to settle in Australia and establish a government under the British system of rule of law?

Two hundred and fifty years ago, the laws that existed in England were extremely harsh and the courts kept indiscriminately sentencing people to lengthy gaol terms even for what would today be considered to be minor or even forgivable offences such as stealing food to eat. So bad was the resulting overcrowding of its prisons that the British government started to send its convicts to America as prison labour. However, when America became independent in 1783 with a war that had lasted since 1775, the government looked around for somewhere else to transport its prisoners to. It did look at Africa but found that it could not humanely establish convict settlements on that continent. Initially the idea of Australia, as a potentially suitable place, was not considered but then in desperation, the government agreed to establish a penal settlement there.

It was therefore in 1787 that a flotilla of eleven ships carrying over 1500 men, women and children comprising 550 soldiers and freemen and 756 convicts, left Portsmouth for Australia, a journey of 252 days covering over 24 000 kilometres, arriving at Botany Bay on the 20th of January 1788. A similar example to us in this day and age would be witnessing the landing of an alien spaceship on the shores of Sydney Harbour. It would be amazing but also terrifying.

Shortly after arriving, on January the 26th, Governor Arthur Phillip raised the British flag on Australian soil and with that action, the principles of British law and British democracy became the law in what was to become known as Australia.

You can read more about the arrival of ‘the First Fleet’ and the development of this country into a modern nation on this website at 'A Continent for a Nation'.