THE DETAIL OF THE AUSTRALIAN CONSTITUTION

THE MAKING OF THE AUSTRALIAN CONSTITUTION:

The federation of Australia came into being through a series of meetings which cumulated in a federation conference held during the Easter weekend of March 1891. The Premier of Queensland, Sir Samuel Griffith, had travelled to Sydney on the Queensland government steamship Lucinda (pictured alongside) and on the Sunday, he and others took a cruise in the Lucinda on the Hawkesbury River during which they drafted a constitution for an eventual federal or central government. (see Founding Fathers)

Some years later the issue of federation was raised again leading to most of the Australian colonies formally sending elected delegates to a series of Australasian Federal Conventions, the first of which was held in April 1897 in Adelaide. A second session of the convention was held in Sydney in September 1897, with a third and final session in Melbourne in early 1898. It was at this final convention that an agreed draft of the original version written in 1891 was agreed upon.

Thereafter, premiers of the Australian colonies met in Melbourne in January and February of 1899 to discuss some further changes and to agree upon a site for the capital of the new federation. A series of referendums were then held in each of the Colonies from April 1899. The referendum in Western Australia was held in July 1900 just a few weeks too late for inclusion in the preamble, but provision had been made in Section 3 of the Constitution to include it as a state within the Australian federation. 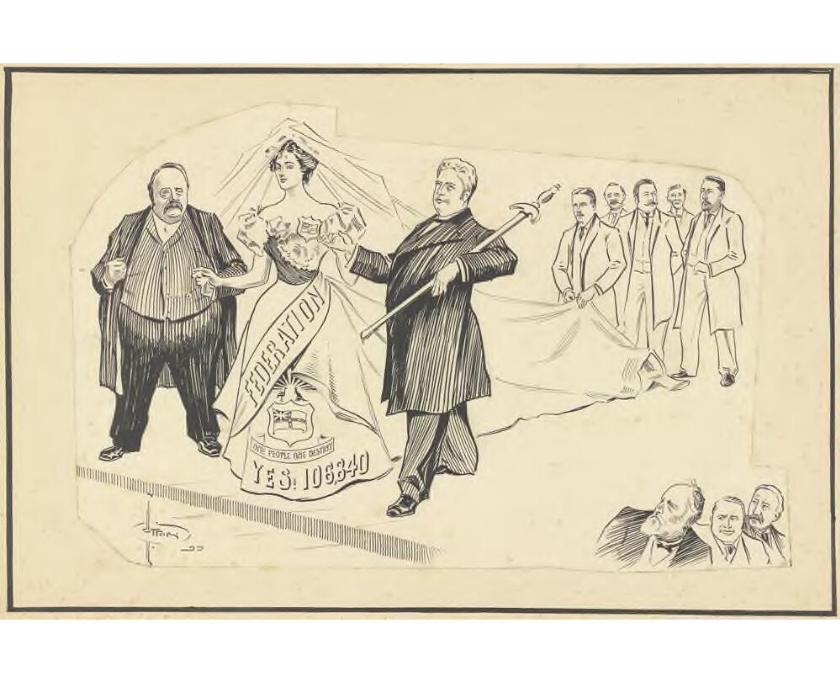 In 1899 and early 1900 delegates and colonial premiers met on several occasions to discuss the passage of a constitution bill to be introduced into the British parliament, that parliament being the only recognised legal source of authority with the power to create a new constitution. It is important to note that the Australian Constitution had been drafted throughout by Australian delegates elected by the Australian people, and was itself decided upon by the people themselves, not by the British parliament whose only involvement was to legislate it into law.

It was thus that, on the 14th of May 1900, ‘The Commonwealth of Australia Constitution Act’ was introduced into the House of Commons and after passing through the Lords was given the Royal Assent by Queen Victoria on the 9th of July 1900. Pictured alongside is one of the many cartoons printed during the campaigns.

THE DETAIL OF THE CONSTITUTION:

‘The Commonwealth of Australia Constitution Act’ of 1900, being an Act of the parliament of the United Kingdom, contains nine clauses, the first eight of which are termed ‘covering clauses’ mainly providing an introduction and explanation to clause nine, which contains the constitution itself (see  https://www.nationhood.org.au/the_australian_constitution).

The constitution is divided into eight chapters comprising 128 clauses or sections.

Chapters one and two deal with the parliament and executive government. Chapter three deals with the judiciary. Chapter four deals with the Commonwealth’s jurisdiction over finance and trade. Chapters five and six with the states, as the colonies were thereafter to be known as. Chapter seven handles the potential seat of the new government and with the provision of a deputy to the Governor-General, and chapter eight sets out the process for amending the Constitution.

It is this process of amendment which places total control of the constitution in the hands of the people. It was the first and only one of the former colonies of the British Empire to do so. Whilst Canada had become an independent Dominion with the ‘British North America Act’ of 1867, it left control for constitutional change in the hands of the British parliament. This control was only ‘repatriated’ to Canada in 1983 and then only to its parliaments not directly to its people.

The only clause in the Australian Constitution which left a legislative power with the Monarch, other than the Assent, was section 59 which states: the Queen may disallow any law within one year from the Governor-General’s assent...

However, this section was included in the event of the new parliament, the composition of which was, at the time, unknown, passing laws contrary to the interests of the people. It has never been exercised and, in any event, the primacy of authority over this and, indeed, all clauses of the constitution have always been in the hands of the Australian people who have the power of removal and alteration at a referendum.

The ‘Queen’ mentioned in our constitution refers, of course, to Queen Victoria and what may appear to be an obsolete provision is covered by Section 2 which states: The provisions of this Act referring to the Queen shall extend to Her Majesty’s heirs and successors in the sovereignty of the United Kingdom.

The Constitution also recognised the continuing existence of the six colonies as states within the federation.

It established a centralised government which was to operate as a federal authority, and sets out guidelines for relations between the Commonwealth, as the federal government was called, and the states including the removal of all tariff and customs barriers, thus creating a common federal trade and customs policy.

The constitution commences with a preamble. A preamble, whilst not a clause, is nevertheless an integral part of the constitution. Some jurists do not consider preambles to be important in law, whilst others hold the opposite view. The preamble in our Australian Constitution is vital to interpreting the clauses which follow. It is one of the very few constitutions which invokes the blessing of Almighty God. Even the American Constitution of 1787 does not even mention the word ‘God’.

Whereas the people of New South Wales, Victoria, South Australia, Queensland, and Tasmania, humbly relying on the blessing of Almighty God, have agreed to unite in one indissoluble Federal Commonwealth under the Crown of the United Kingdom of Great Britain and Ireland, and under the Constitution hereby established:

These words are not simply an introduction, as with most preambles in the world, but are a statement of three irrefutable facts.
• The first was that six Australian colonies united in one federation to be named ‘The Commonwealth of Australia’.
• The second was that the federation is to be indissoluble.
• The third was that as well as being subject to the constitution hereby established, it was to be under the Crown of the United Kingdom of Great Britain.

The ‘indissolubility’ of the union as mentioned in the preamble has never formally been challenged and the only way in which one or more states could potentially secede from the federation nowadays would be via section 15 of the Australia Acts 1986 requiring the consent of all the parliaments of all six states plus the consent of the parliament of the Commonwealth of Australia.

THE INDISSOLUBILITY OF THE UNION:

In 1933 the State Parliament of Western Australia held a referendum to secede from the Australian federation. That referendum obtained a 66.23% of the votes cast in its favour and led to the Secession Act of 1934 being drafted into a petition, and in the following year this was taken to the United Kingdom Parliament by a delegation of state parliamentarians.

However, the petition was not entertained as it had emanated from a state and not from the Commonwealth of Australia, which was held to be the proper place for the petition to have been addressed in the first instance and the proposal for secession was not proceeded.

The High Court has often referred to the preamble for guidance in its deliberations on constitutional matters and the Acting Solicitor-General Dennis Rose QC had stated in 1993:
I note, for example, the reliance placed by several Justices on certain words in the present preamble - i.e. ‘the people ... have agreed to unite in one indissoluble Federal Commonwealth’ ... it illustrates the potential legal significance of preambular declarations.

Whilst the preamble specified that the federation will be “under the Crown of the United Kingdom of Great Britain” the constitution itself mentions the word: ‘Crown’ only three times, two of which are found in section 44 and relate to the holding of office ‘under the Crown’ and the requirement that ‘Crown lands’ be used for the new capital.

The ‘Crown of the United Kingdom’, however, means not just the body politic but also opens the doorway to everything that the monarchy and the constitution means in the United Kingdom. Such British constitutional documents as Magna Carta150 and the Bill of Rights151 are not mentioned in the Australian constitution but they are nevertheless relevant.

In the 19th century, ‘the Crown’ was one entity and its authority was exercised through the British government. Today, it is a recognised fact that the sovereignty of the Crown is now ‘divisible’, or shared, amongst the sixteen Commonwealth Realms which comprise the United Kingdom together with those former colonies which have retained the Queen as their sovereign.

Some people have held that this separation occurred in 1954 with enactment amongst the Commonwealth Realms of their individual ‘Royal Style and Titles’ Acts. Others hold the opinion that the concept of multiple Crowns each subject to individual constitutions but worn by the same monarch was first evidenced by the British Royal and Parliamentary Titles Act of 1927. However, actual formal recognition by the governments of Great Britain and the Realms that the Crown had been made divisible can be found in the Statute of Westminster of 1931 which followed resolutions passed by the Imperial Conferences of 1926 and 1930. These conferences comprised representatives of the former British colonies which, although independent from British rule, had remained under the British Crown. These countries included Australia, Canada and New Zealand.

THE STATUTE OF WESTMINSTER:

The Imperial Conferences came about in the early years of the 20th century because both Australia and Canada had been dissatisfied over the way in which Britain still looked upon them as British colonies whereas they had become independent nations in their own right although opting to remain under the Crown. The system of government in each of these nations was called a ‘constitutional monarchy.’

The conferences generally sat over several weeks and it was during the conference of 1926 that Lord Balfour, who was a minister in the British government, and others worked out a formula to put down in law the relationship between these independent nations and the United Kingdom and in particular the ability of the British parliament to legislate for them with the expectation that they would automatically agree.

These meetings cumulated in the Balfour Declaration of 1926 which declared that the United Kingdom and the Dominions were henceforth to be recognised as: “... autonomous Communities within the British Empire, equal in status, in no way subordinate one to another in any aspect of their domestic or external affairs, though united by a common allegiance to the Crown, and freely associated as members of the British Commonwealth of Nations.”

Also recommended was that the Governors-General should no longer serve as British government representatives but should be subject solely to the constitutions of the respective countries in which they served. (This later led to the creation of High Commissioners to act as ambassadors between the Realms.)

Following the Declaration being agreed upon by the conference, the British parliament enacted the Statute of Westminster in 1931. This statute prohibited the British parliament from legislating over the Crown, over Royal Style and Titles and over the succession of the monarchy unless those nations which had, as their sovereign head of state, the monarch of the United Kingdom also consented. In this manner, the monarchy became subject to the parliaments of all the realms and not just to that of the United Kingdom.

There are those who say that we, in Australia, are not free or that we answer to the United Kingdom. They are totally wrong. Upon the commencement on January the 1st 1901 of ‘The Commonwealth of Australia Constitution Act’ that Act established in law a constitution which was vested in the Australian people who thereafter held absolute sovereignty over the nation.