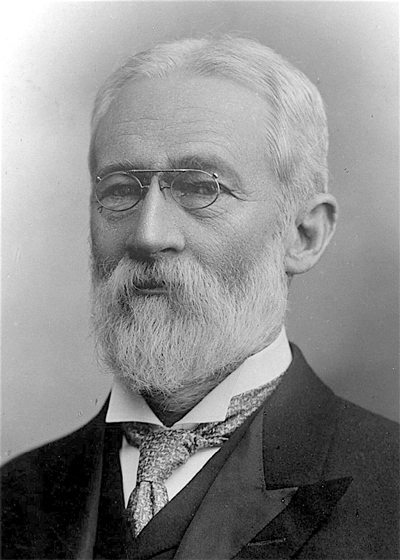 Of all the those who led the fight for the union of the six colonies into one nation, other than Sir Henry Parkes, Samuel Griffith was probably the most outstanding.  It is really quite amazing that each of the colonies produced representatives of such absolute dedication and high ability without whom federation may never have occurred.

Griffith was born in Wales in 1845.  His father was a Congregational minister who, when Samuel was eight years old, was offered a ministry in Queensland and took his family to Australia.

Griffith was educated at various schools in Queensland and New South Wales, where his father’s ministry took him, and then at the University of Sydney, where he won a number of prizes and scholarships including one which provided for travel to Europe.  One of his professors judged him to be one of the four best students of his (Griffith’s) decade.

As a young man he was very forthright and extremely enterprising.  From a young age he attended debates in the Queensland Parliament and aged 17 published a series of twenty-five critical articles on its members in the Queensland Guardian. When only 18 he rather cheekily applied for the headmastership of Ipswich Grammar School.

Despite his studying and his strict Protestant upbringing, he was a fun-loving young man, often running out of money and considered by his family to be totally irresponsible and often scandalous due to his several affairs.

However, he did not allow pleasures to interfere with his studies and read law and was called to the bar in 1867 when 22 years of age.  Five years later he found himself elected to the Queensland Parliament.

During his political career he was Attorney-General, Minister for Education and Minister for Works, and then became leader of the Liberal party in 1879 and then Premier in 1883.  He was 38 at the time and was considered to be a workaholic, often working more than 16 hours a day.  He was also a reformer and during his time as Premier introduced an amazing number of reforms desperately needed to bring the state into the modern age. However, the law was always his first love and during his political career he continued to practise law, appearing in some 250 cases during this time.

Although a Queenslander, and Premier of Queensland, Griffith always considered himself to be firstly an Australian. In an 1891 address to the Royal Geographical Society of Australasia he had said: 'In spirit I am as much an Australian as any man'.

As such he was drawn to the early moves towards uniting the separate Australian colonies and became heavily involved in the federation movement. He drafted the constitution of the Federal Council of Australasia which first met in 1883 and was its president on three occasions.

He was a dominant force at both the Australasian Federation Conference held in Melbourne in 1890 and at the 1891 Constitutional Convention held in Sydney in 1891. Unlike the 1890 conference which was more or less a voluntary gathering, the 1891 convention comprised 46 delegates appointed by the colonial parliaments.  It was at that conference that Griffith was asked to prepare a draft Constitution for consideration at a later convention.

Inglis Clark, the delegate from Tasmania, had drafted a constitution which he submitted to the constitutional committee which comprised Griffith, Charles Kingston (from South Australia) and Edmund Barton (NSW). Clark had by then opted out. (see https://www.nationhood.org.au/andrew_inglis_clark)

Some years before, in 1884, t the Queensland Government purchased a paddle yacht, named Lucinda, to be used for government work. Its saloons were well fitted for meetings and social occasions and even had electric lights which was unusual for the 1880s. It was used by ministers when they needed to travel and also sometimes for cabinet and other government meetings as well as for ceremonial occasions. During the later visit to Brisbane of the Duke and Duchess of York (later King George V and Queen Mary) following their attendance at the formal opening of the first Australian parliament in Melbourne in 1901, they were welcomed on board the Lucinda.

Being the premier had its advantages and Griffith commandeered the vessel and travelled to Sydney with his party to attend the National Australian Convention in 1891. On being elected chairman of the Constitutional Committee he arranged for it to meet on the boat and organised a journey on the Hawkesbury River on the Easter long weekend between the 27th and the 29th of March to enable the group to finalise the draft constitution.

The committee had the draft prepared by Clark which confirmed many of the provisions Griffith and others were already thinking of. They had the British North America Act of 1867 as a guideline as well as the American and other constitutions two of which Clark had also drawn heavily upon.

However, whilst many constitutions are verbose and often complicated in their wording, Griffith wrote in simple, understandable and uncomplicated English. Whilst eighty-six sections from Clark’s draft are similar to those that became the final draft, most were taken from other constitutions but rewritten by Griffith.

The group anticipated fierce debate at the next convention as the constitution had to cater to the interests of all six colonies, seven if you count New Zealand which was also considering becoming a part of the federation.

What is not generally known today is that until 1841, New Zealand was a de facto part of New South Wales. That year ‘the Charter for Erecting the Colony of New Zealand’ came into force and New Zealand thereafter became a separate colony.

The draft constitution was printed by the New South Wales Government Printer ready for the next meeting of delegates. A few copies of this draft with notations by other delegates can be found in several museums and libraries.

However, the colonial parliaments did not get around to meeting again until 1897, by which time Griffith had resigned from the Queensland parliament and in 1893 had been appointed the Chief Justice of the Supreme Court of Queensland in which position he served until 1903.

It was mainly Edmund Barton who continued on with his work and presented the draft constitution to the next convention held in 1897. However, Griffith wrote extensive briefing notes on the subject for delegates and personally advised Barton and others from behind the scenes. He also campaigned in Queensland to ensure the passage of the eventual referendum.

Sir John Quick, a leading Victorian lawyer who had also been a delegate to the federation conventions, wrote this to Griffith: 'I congratulate you on Federal Voting in Queensland. Thus crowning your long sustained and patriotic labours in the cause of Australian unity'. 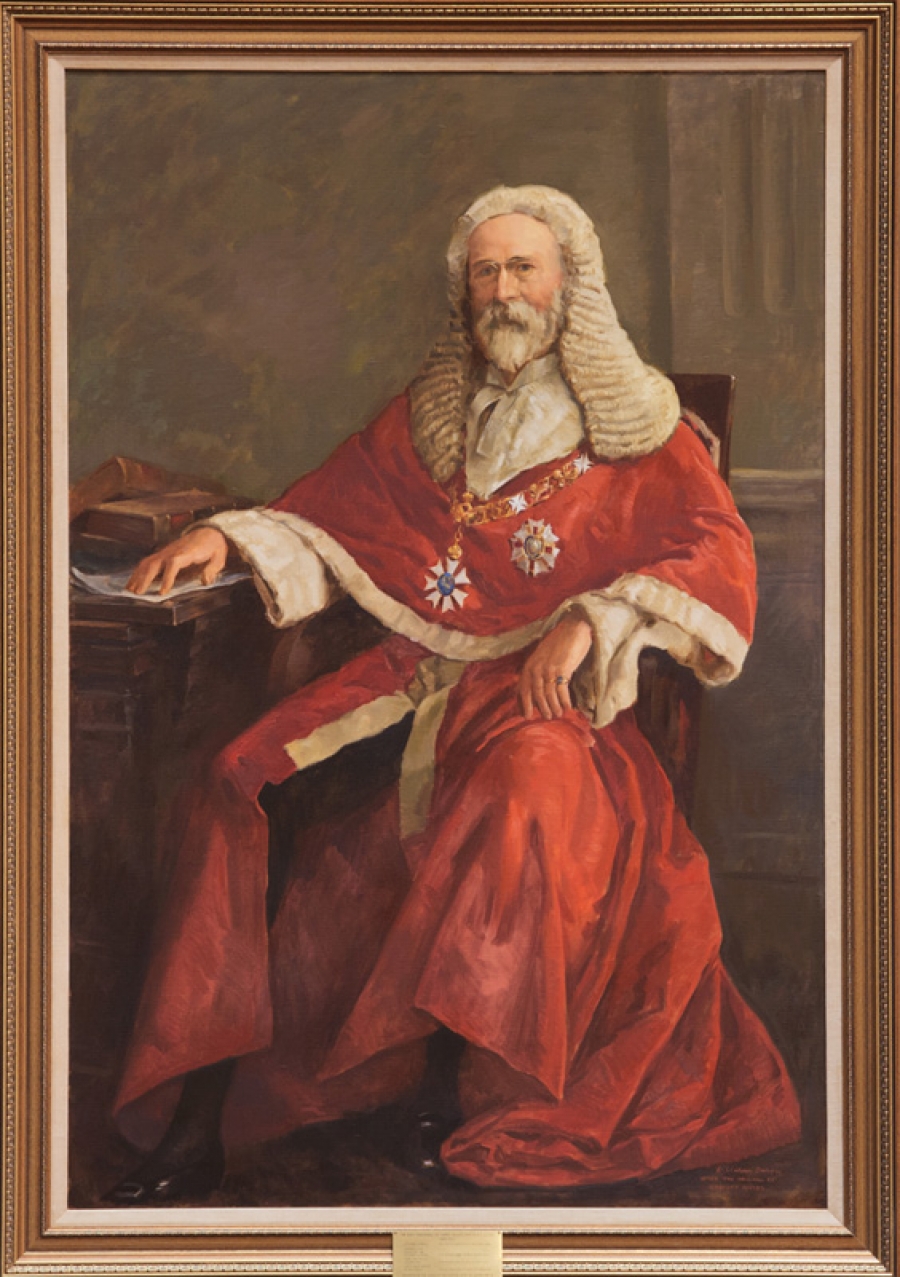 During his ten years as Chief Justice of Queensland, he codified the Queensland criminal law which was the first such criminal code in Australia. He also revised the Supreme Court rules including those for probate and matrimonial cases. As Chief Justice, he served several times as acting governor of the state.

During these sixteen years on the High Court bench Griffith had sat on 950 reported cases.

In 1913 he visited England and sat on the Privy Council but found the law lords to be both not up to his professional standard and ignorant of life and conditions in Australia. He called for the Privy Council to be extended to include jurists from the Dominions so as to widen the knowledge of conditions outside of England. Years earlier, in 1888, he had seriously thought about moving to Britain to stand for the British parliament so that he could try to bring about a greater understanding of Australia and the other Dominions.

In 1886 he was made a Knight Commander of the Order of St Michael and St George and received the GCMG in 1895. Sir Edmund Barton spoke of him as 'the greatest lawyer in the Commonwealth'. Whilst there were a number of men who brought about the federation of the Australian colonies, it would not have happened without the brilliance and fortitude of Sir Samuel Griffith. He was truly a leader amongst men.