The Original Peoples of Australia

Aboriginals have lived on the Australian continent for over 50,000 years and when Captain James Cook arrived in 1770, he found what was the oldest race that had survived intact and uninfluenced by outside civilisations. Whilst the Dutch and others had visited parts of Australia, they did not stay and did not interfere with the lifestyle of the aboriginal peoples.

They inhabited areas throughout Australia from the tropics through to the cold areas of Tasmania. Even though modern-day studies indicate a common ancestry, when the British arrived there were about 600 different groups of Aboriginal peoples each with their own distinct languages, beliefs, culture and traditional lands which they referred to as Country. These lands used rivers, hills and other geographical features as boundaries.

In January 1788 a fleet of 11 British ships comprising six convict ships, three store ships and two man-o-war ships, arrived at Botany Bay but then moved on to Port Jackson, which is now the site of the present-day Sydney and there established a settlement principally to house the convicts brought over from England.

On the 7th of February 1788, the entire eastern coastline of Australia, including Tasmania, was proclaimed as the Colony of New South Wales. Only Western Australia was excluded, being proclaimed as a separate British Colony in 1829. 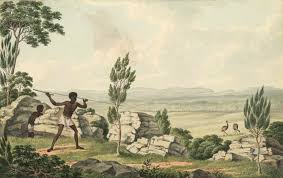 The Aboriginal peoples were traditionally hunters and gatherers who did not live in one place but moved around in search of food. They had specific areas that they hunted or foraged in. They lived either in bark shelters, in caves or in the open. Trade and bartering were common and there were trade routes connecting different areas. The sorts of items that were traded included such items as stone and timber for making axes and spears and kangaroo skins.

Since there were no houses or townships as the British were accustomed to they assumed that the land was uninhabited and proceeded to enclose areas for farming and habitation little knowing that they were disturbing the hunting grounds and water holes of the aboriginal inhabitants. Unfortunately, the British also brought new diseases to Australia to which the Aboriginal peoples had never been exposed which meant that many died from the diseases to which the British were immune or had some immunity from.

Today, about three percent of Australia’s population has Aboriginal heritage and they still share stories which have been handed down from generation to generation. These stories are called the Dreaming, or Dreamtime and is the way in which each generation learns about their history, their laws and their relationship with the land. Dreaming stories explain their understanding of how the world and life was created by the ancestor spirits.

They are ethnically distinct from the Aboriginal people although grouped as Indigenous Australians. Most Torres Strait Islanders live in mainland Australia leaving only around 4500 remaining on the islands.

Torres Strait Islanders are essentially divided into five distinct peoples all of whom are traditionally a seafaring and fishing people.